This video is from last year but the fires in California is identical in that there is that same strangeness.

It seems like there is another energy beam fire in California as it was last year. I had already written an article based on this to last year’s fires.

Notice the tress still standing though the buildings completely burned down.

For those who are new to energy beam fires, here is why I say this and why others say the same thing:

These fires are not normal in that things that are not suppose to burn under temperatures of forest fires burn. 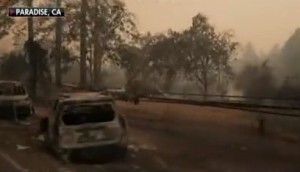 How did this car burn when there is a big open space next to it?

You can see by some of the pictures here that show it’s not a normal fire.

Here is one picture of cars on a highway that are burned. Now, how can sparks burn a travelling car? How can fire that is not hot enough burn something that has a much higher melting temperature, such as glass?

Then, we have the lying government telling the lying media, “that this is the new normal.” Think of how sick this is! First, why should it be “normal”? Why should fires be any different than what it has been in the history of the world? They are different but why? The difference is that there are evil men in power that are doing this. 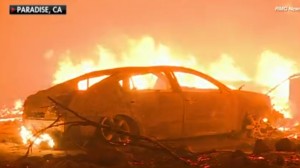 Where is the glass?

The word “normal” is something that is suppose to be natural but what we see here in these fires is far from natural. This is out new “norm” that we are suppose to accept. This phrase, “new normal” is used when it’s applied to crime. This is to get us to accept the increase in crime caused mainly by non-Christian immigrants, and you know whom I’m talking about.

Back to the California fires. I will not be surprised if we start seeing fires in other countries that have the same characteristics – despite if the climate is damp and raining. After all, this is part of the “new norm.” 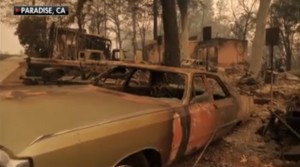 One revealing picture is of cars on a main road that were completely burned. The drivers had obviously had time to pull off to the shoulder of the road and got up. But the fact is, how in the world can cars catch on fire driving down the road where there is a big fire break and the trees you do see have not burned down? How is it that such extreme temperatures are built up where glass and some metal melt that have a melting point higher than what sparks can produce? How can little sparks (if, in deed there were any) burn a car that is travelling down the highway? The answer is, it can’t by ordinary means. It would have to be done by some energy beam weapon that the public is unaware of. 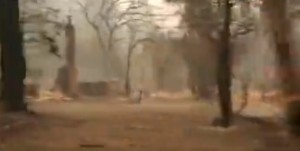 First and foremost I'm a Christian and believe that the Bible is the inspired word of Yahweh God. Introducing people to the Bible through the flat earth facts.
View all posts by revealed4you →
This entry was posted in alternative news and tagged alternative news. Bookmark the permalink.