The Importance of Perspective In Understanding the Flat Earth Model, part 8

The Importance of Perspective In Understanding the Flat Earth Model, part 8

The motion of the planets, as described in this series of article from an old flat earth booklet, how the moon, for example, would have to behave IF it was traveling round the earth WHILE the earth itself is travelling round the sun. This is accompanied by illustrations demonstrating the impossibility of such motions. 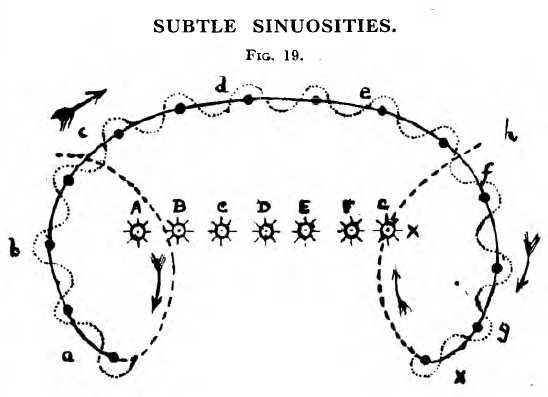 In Fig. 18 we have shewn that the moon’s monthly motions would be exceedingly erratic if the moon had to revolve all round a rapidly moving earth, for sometimes it would have to get right in front of the globe, otherwise it could not travel all round that body.

Yet the moon’s daily motion of about twelve or thirteen degrees is always “direct” through the zodiacal signs; and it never varies more than two or three degrees. But if the sun, by some astounding “pulling” powers, and without any physical fastenings or connections, can drag after it, in its vast and unknown journey into boundless space, all the planets, the globe and the moon; then these bodies, and especially the latter, should always be found in the rear.

In this case the moon would never really travel round the earth at all, neither in a circle, nor in a spiral, nor an ellipse; but its movements would manifest a series of serpent-like sinuosities as found above in Fig. 19. thus again we find that the lunar orbit, under this extravagant theory, would be most unnatural and erratic. Its form may intimate its origin!

Yet the moon’s actual movements, as given in a practical almanac like the Nautical Almanac, are fairly regular and uniform, again proving the discrepancy which exists between practical astronomy as used by navigators, and theoretical astronomy as taught to landsmen in the schools and colleges.

With natural and practical astronomy we not only have no quarrel, but we have had great pleasure in its study for more than fifty years; but with the ever-changing unnatural and infidel speculations of the schools true Bible Christians will wage undying warfare.

First and foremost I'm a Christian and believe that the Bible is the inspired word of Yahweh God. Introducing people to the Bible through the flat earth facts.
View all posts by revealed4you →
This entry was posted in Flat earth and science, Flat Earth Proof, Old flat earth news and tagged flat earth experiments, law of perspective, old flat earth articles. Bookmark the permalink.