The Importance of Perspective In Understanding the Flat Earth Model, part 7

The Importance of Perspective In Understanding the Flat Earth Model, part 7 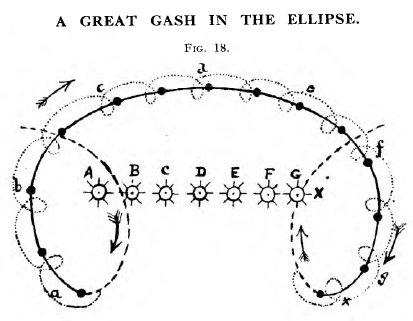 And what about the altered orbit of the globe? Instead of an ellipse it is “now” a cycloidal curve (as represented by the thick line in figure 18), and a curve shewing that the globe must have reversed motion at each end of the cycle, as it travels from left to right.

Let the monthly positions of the globe be represented in Fig. 18 by the heavier dots, and it will be seen that, in relation to the sun’s corresponding positions, that orb would sometimes appear to be “stationary” in the zodiac, and at other times even “retrograde!” This of itself is sufficient utterly to discredit the new and latest theory of globular motion; for the sun’s “apparent motion” through the twelve signs of the zodiac in uniformly “direct,” as any good ephemeris of the Nautical Almanac will show.

As to the path of the moon, it is more tortuous than ever, as indicated by the dotted cycloids in the above diagram. But it would require further, and larger, diagrams to expose in detail this monstrous motion and movements; and our space is limited. Suffice it here to say that diagram 18 represents the moon getting in advanced of the globe, once every month; which would compel it to move at such an awful rate, that the magnitude and duration of lunar eclipses would be enormously altered and lessened. Yet such eclipses were correctly calculated long before the time of Herschell and Co.

First and foremost I'm a Christian and believe that the Bible is the inspired word of Yahweh God. Introducing people to the Bible through the flat earth facts.
View all posts by revealed4you →
This entry was posted in Flat earth and science, Flat Earth Experiments, Flat Earth Proof and tagged flat earth experiments, law of perspective, old flat earth articles. Bookmark the permalink.