I just came across an article and video by Mike Adams and his talk on a UFO invasion of earth. The article is here for those who want to read it:

Basically, what Mike Adams talks on is about consciousness of life and that we could be invaded by ETs for our natural resources.

When Mike Adams talks, many times the video cuts away at a video scene of the Cosmos. This is subtle propaganda to make real the lie of the Universe – in that there are trillions of suns and planets out there.

About 3.57 minutes in Adams talks about the “Big Bang.” Then asks the rhetorical question: “Don’t you believe in the Big Bang?” Adams says he does but that will be left for another time. In other words, he is like so many other misguided Christians that God used the “Big Bang” and billions of years to do that. He asks the question, “Who started the Big Bang?” He assumes that the Big Bang is true, so, that means that God created everything like what astronomers and others say.

Here is an old mind control technique that Adams used. Paraphrasing he said…”Once you accept that Consciousness is spread all over the Universe, which they are…there are other consciousness beings all over this Universe, other civilizations.”

Notice how he sets the stage, “Once you accept.” This is classic NLP. OK, maybe he didn’t intened it that way but the fact is, you “have to accept” then talk on whatever it is. If you don’t accept, you can’t go along with whatever he is going to say. Flat earthers DON’T accept the Cosmos, Extraterrestrials from other planets, tavel through vast distances from space, etc.

Then Adams said, “Look at me, a partial American Indian, maybe, roughly 10%. which the other roughly 90% is European, which are descendent of Africans (paraphrase).” What nonsense – that white people came from Negroes! It would take another article, a book to talk on this. Back to the main point…

The video is partly made up of Adams speaking with a CGI background. Then there are some video clips on the topic he is discussing. Finally, there is video of more CGI as if to subliminally reinforce what he is saying – that there is a Cosmos with trillions of stars and planets.

If you don’t want to watch this 21 minute video, basically what he is saying is, that all civilizations in the Cosmos is aggressive and it is they who raid other planets for natural resources; that “they” are like is – aggressive and warlike. And those what are not, they stay at “home” (their own planet) and don’t venture out.

At 8.30, he talks about Aliens coming to earth to essentially steal our planet our natural resources. What a joke. If that was the case they would have done that thousands of years ago! IF that was the case, where would ETs most likely be found? Where would space ships be found more often? Around mining areas! Have you read any news articles about UFOs being spotted at gold mines? Lol 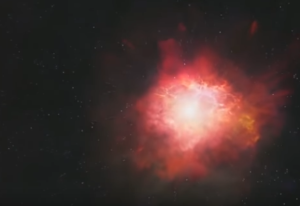 About 10 minutes in, Adams talks about our nuclear denotation signature that has travelled light years; that it has reached 50 lights, telling other civilizations that we are here we and know how to make nuclear weapons. IF these signals can travel so far, then why can’t we pick up a mobile signal from a cell phone tower only 10 miles away?

About 12.10 in Adams talks about the “conscious biological systems” on the planet. He uses the words: conscious biological systems and species. That is what Adams refer to us as – NOT has human beings! He makes us think that we came out of some Petri dish. Maybe that is what he is implying – that Aliens made us! He does not use words like: humans, people, God’s Children. Oh, no, that would be too Christian.

Talks about how incredibly stupid we are. We’ll he is right – for those who believes Mike Adams’ nonsense! He said this in the context of the natural resources we are using that we are abusing; this is the resources that these other civilizations from other planets want.

About 14 minutes in we hear, “…a retarded infant spices like us.” And “If we don’t take care of our spices that are other spices that will take care of, that will eliminate us.” Some of us are retarded – believing in the Big Bang. He talks “about our expanding signal that will wake up everybody, everybody in the entire Cosmos sooner or later.” How is that possible with the Universe already 13 billion light years! How can our “signals” gain speed on this? How can it reach even 1% of this? What a laugh!

At 16 minutes in, “We have to go(meaning not living on the earth). How will this be done? It could be by taking over the power structures. Push for increase infertility, depopulation and cognitive impairment. This is happening right now.”

All the troubles we have now are NOT being done by Aliens but by evil people here on the earth.

This is a classic example of mixing facts with the fictional Alien Agenda.

Finally, at 18 minutes in Adams said,  “We can’t prove that we are being targeted right now by some ET, Extraterrestrial civilization but we can take some very accurate and informed guesses. Mike Adams admits this is being done by Bill Gates and others, so why do we need Aliens?

I will follow this up with another article that would be directed to those who do believe in Alien invasion and the contradiction and the lack of logic in using this as an argument. Hopefully, an article like this can be shared with your UFO believer in order to wake them up to the truth.

First and foremost I'm a Christian and believe that the Bible is the inspired word of Yahweh God. Introducing people to the Bible through the flat earth facts.
View all posts by revealed4you →
This entry was posted in aliens, UFO and Aliens and tagged fake ufo conspiracy. Bookmark the permalink.