UFO Believers Should Question What They Are Told 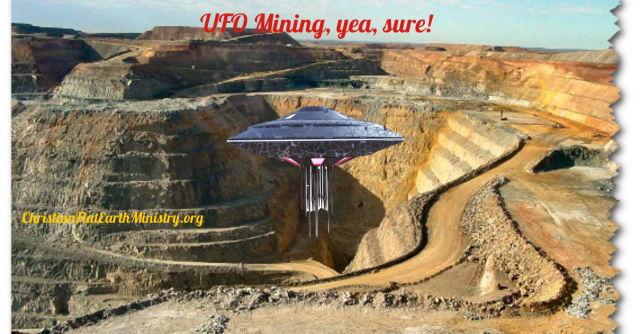 UFO Believers Should Question What They Are Told

This article is addressed to UFO believers. For flat earth believers, like most of the readers on this website, it’s good to pass the following information on to them. So, kindly ignore when I say “you UFO believers.”

You UFO believers all know and have been told that the earth has been visited by ETs and that one reason why they come here is to mine for our natural resources. The most recent talk on this is by Mike Adams who has over 2 million followers on Facebook as well nearly the same amount on his Natural News website.

There are many things that you are told about UFO and civilizations from other planets that you should seriously question.

We have been told by people like Steven Greer, of The Disclosure Project, that people from other civilizations have come here and taken our natural resources. IF that is true, why is anything left? We have been mining for centuries and it looks like no one was here.

There is no evidence that they have been here in the past. If there were, there would have been signs of the technology of the mining – even if it was smooth glass-like walls done by lasers of some sort.

If the answer we are give changes to: “Well, they are waiting.” Waiting for what? If they have the technology that is far in advance of ours, they can wipe us out; they should have wiped us out long ago or at least sent us back to the stone age and take all the minerals they want. So why wasn’t this done?

Scientists tell us that other solar systems are like ours – that most of the planets are not inhabited. If you look at our solar system, there are huge planets like Jupiter and Saturn, so why would Aliens even come here? They would have plenty to take from other planets and they won’t have to wage war to do so.

We are told by UFOlogists and others that one of the natural resources they come to take is our water. Oh, really! I would like all you believers in Aliens to think about this: Can you imagine the cost of bringing water back to their planet, many light years away? Just look at what it would cost to ship water via plane from South America to Europe, for example. Water weights about 6 pounds a gallon. Who could afford to drink, bathe and cook in the water? Buying Dom Perignon 1965 would be cheaper!

Then what about all the other cheap natural resources that we are told is taken, such as wood and iron – the cost would be prohibitive.

IF ETs were taking our natural resources, they would refine it here. I mean, after all, at least give them credit for intelligence! They would take back the pure metal so they would HAVE TO refine the metal on earth. So, where is the evidence for that?

If you take North America before the White man came here, the Extraterrestrials should have taken all they wanted before the continent filled up with people. And if they did, why didn’t we read in the newspapers of the 19th Century, for example, that early settlers found open pit mines and gold mines with very little left over? Why didn’t they come across huge piles of rocks that the minerals came from? They didn’t and that is why there were no Aliens mining here.

If ETs are so advanced, why would they come here for water in the first place? Since humans on earth can condense water from the humidity in the atmosphere why can’t they? Since we can distil water from salt water, why can’t they? That’s really strange that ETs have the technology to travel across the Universe yet they can’t do the simply technology that we can to get drinkable water from other sources.

IF these Aliens are war-like with advanced weapons, why are we still here? We would have been killed thousands of years ago or at least be kept in a primitive technical age. According to some UFO believers, most of the space travellers are hostile, while the peaceful one stay on their own planet. So, there would be no “good guys” stopping the bad guys from killing us. Which leads me to another thought, how do these scientists and UFO believers know what is out there? If there are trillions of planets and we haven’t even visited one planet, how can they possibly know? Oh, you say that some people were contacted and talked to ETs. And this is what the ETs told them. Really? Why would you believe them when your own neighbour lies to you? Why do you believe them when you can’t believe the local repairman, for example? Yet, you believe a total stranger (a stranger in the truest sense).

Just use logic and pray on it, too, of what you are being told is the truth or not. You can also check check the other side. Check out some flat earth videos, do a search on Google with the words “flat earth.” Or, you can go to www.christianflatearthministry.org and find all kinds of information :- )

I hope this information helps your UFO friends.

First and foremost I'm a Christian and believe that the Bible is the inspired word of Yahweh God. Introducing people to the Bible through the flat earth facts.
View all posts by revealed4you →
This entry was posted in aliens and tagged ufo conspiracy, ufologist and flat earth. Bookmark the permalink.