Hi everyone, I’m back! 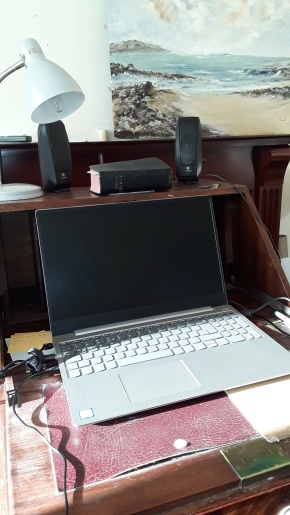 I was told by the computer repair man that my hard drive crashed and it could not be repaired. I do believe him because it was an old computer; I must have had it for 5 years and it was used when I bought it. It didn’t need any repairs while I had it so I can’t complain. It was very slow when I did use it and thought it was some malware I had. Then I got Norton’s last year and it was still slow. I could have had a new drive put in but I decided to by another used computer he had for sale. Otherwise, I would still have had an old computer.

The repairman told me what kind of processor it had; I think he said it was a Celeron, and it is at the bottom of the ladder, but the one that I have now is an i5 something (I’m not a techie, sorry about that). Anyhow it is much, much faster – like using the computer at the library! He said that there is a 1 year guarantee on everything.

Thanks to a faithful donator of this website, I was able to buy a used computer the shop had. It’s a Lenovo.

Anyhow, it’s good to be back. Right now, I’m transferring files from my external HD to the computer HD. By the way, for those that are not techies like me, it’s better, I was told, to get a solid state hard drive (SSD). They are less likely to crash, as they run on memory chips rather than disks with a needle running across it, AND they are much faster in copying and recording. I also suggest that everyone has an external hard drive and store it somewhere else in case your computer crashes or something else happens, if you know what I mean.

Pick up what computer hardware and accessories as you can now, as you don’t know about the chip supply, since, I heard that most of them are made in Twain and China; you know the situation between them now.

First and foremost I'm a Christian and believe that the Bible is the inspired word of Yahweh God. Introducing people to the Bible through the flat earth facts.
View all posts by revealed4you →
This entry was posted in Uncategorized. Bookmark the permalink.