Does the Bible Contain Prophecies About Chemtrails?

In certain religious practices such as Vodou (popularized as “Voodoo”) and Santeria, mercury is believed to have special powers. Practitioners carry it around in pouches, sprinkle it on the floor, pour it into a bath, or burn it in candles. 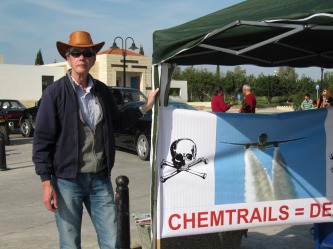 The govt. was actually chemtrailing when there was a chemtrail demonstration going on. Reporters where at a loss for words (they couldn’t deny it).

Even in the most popular religions of the world, incense is used that contains high levels of lead and mercury.

Some use it for protection. Others use it for “spiritual enlightenment”. Some believe that the resulting experiences they encounter as a result of mercury exposure are spiritual experiences. We know these to be schizophrenia, bipolar disorder, ADD, ADHD, autism, dizziness/vertigo, memory loss, and numerous other neurological diseases. The weaking of the human will induced by mercury also opens one up to spiritual oppression and perhaps even possession.

The practice of utilizing poisons such as mercury is prohibited by biblical law (Deu 18:11-12, Exo 22:18). This practice is often referred to as witchcraft or sorcery (Strong’s #3784).

The book of Revelation contains several references to “sorcery”, but when we take a careful look at the original language, we find something very interesting.

“…For your merchants were the great men of the earth, for by your sorcery all the nations were deceived.” —Revelation 18:23

The word “sorcery” in this passage is the Greek word “pharmakeia” (Strongs #5331) (far-mak-i’-ah). This is the source of the English word “pharmaceutical”. The true meaning if the word pharmakeia is “to drug or poison”, so here we see the chemical dumbing down of the world by drugging and poisoning. This is to occur shortly before the return of Christ to Earth. This modern chemical-dumbing-down of the population was predicted in the Bible thousands of years ago.

As I will show later in this article, the use of mercury in the body (as a “medicine” or anything else) is equivalent to the practice of pharmakeia, or “sorcery”, or “poisoning”. We can easily relate this word “pharmakeia” to “poisoning” because the Biblical word for a person who practices pharmakeia is defined as “a poisoner”.

So the verse above actually predicts that a global deception will take place. This deception will be facilitated by drugging people with known poisons. The target of this drugging is the people of the nations of the Earth. In fact, this is a direct reference to the dumbing down of the population thereby making them more prone to deception.

Who is going to perform this drugging?

According to Revelation 18:23, the great drugging and the great deception will be performed by:

“…merchants (who) were the great men of the Earth.”

These are not necessarily the only people who will be involved in this deception by drugging, but they certainly qualify.

As the pieces begin to come together, we will discover that the Rockefeller family is spearheading the move for world depopulation, and has been for the past two decades. For in-depth documentation supporting this, please see this video: 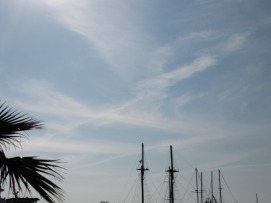 Mercury, Autism, and the Global Vaccine Agenda
Are Chemtrails the “Sorcery” Spoken of in Revelation 18?

We are all familiar with the widespread use of pharmaceutical drugs today, but for the past 20 years, many people have been moving away from the use of drugs, vaccines, genetically-modified (GM) foods, and other known toxins. In fact, in the past few years, this reconstruction of health values has created a virtual stampede toward healthy, natural, organic lifestyles.

With so many people moving away from drugs, how can Revelation 18:23 be fulfilled? Are there actually enough people still using drugs, vaccines, or mercury-laden “silver” fillings to facilitate a global deception?

Certainly not. There must be more to the story. There must be something more invasive that literally “forces” people to take drugs and poisons so as to facilitate this massive global deception predicted by the Bible.

When you know that mercury and aluminium clearly facilitate the dumbing down of human populations, and when you consider the strong indications that chemtrails contain both mercury and aluminium, then it is reasonable to consider that the chemtrail spraying campaign is the fulfilment—at least in part—of this Biblical prophecy concerning the deception of the nations in the end times.

As this article is being written, there is widespread talk in the United States, Europe, and Australia about forced vaccinations, and this would certainly qualify as the fulfilment of this prophecy as well.

In fact, there is nothing in this prophecy to indicate that there is any single event that accomplishes this mass poisoning. The prophecy simply says “…by your sorcery…” indicating the general method in which this deception takes place.

It is likely that several things including pharmaceutical drugs, chemtrails, and mass vaccinations all play a role in the fulfilment of this end-time prophecy concerning the poisoning of the nations to facilitate a great global deception.

A Deeper Look
Sorcery Is Pharmacology Is Poisoning

We’ve already established (above) that the biblical word “sorcery” in Revelation 18:23, when properly translated, means “pharmacology”, but is there really a connection between pharmacology and “poisoning”?

The book of Revelation contains references to the persons who actually dispense—or practice—sorcery:

“Blessed are those who do His commandments, that they may have the right to the tree of life, and may enter through the gates into the city. But outside are dogs and sorcerers and sexually immoral and murderers and idolaters, and whoever loves and practices a lie.” —Revelation 22:14-15

“But the cowardly, unbelieving, abominable, murderers, sexually immoral, sorcerers, idolators, and all liars shall have their part in the lake which burns with fire and brimstone, which is the second death.” —Revelation 21:8

“a druggist (“pharmacist”) or poisoner”

Thus, the etymology of the word itself fundamentally-associates the concepts of drugging and poisoning. It would stand to reason that a person who is called a “poisoner” is one who distributes “poison”. Thus, we clearly see the fundamental connection between the Biblical word for “sorcery” (pharmakeia) and “poison”.

Furthermore, since mercury is a potent poison, we can certainly conclude that the distribution of mercury (a poison) is considered “sorcery” (poisoning) by the Bible. If this is true, then the mercury in chemtrails can indeed be considered sorcery and therefore a fulfilment—at least in part—of Revelation 18:23.

Note: All allopathic medicine is a poison. This is what the Bible is mainly talking about as most people take medicine of some kind.

Even if chemtrails only contain aluminium and barium, as a number of tests (both air and soil) have now indicated, these are still poisons to the body and would be considered Biblical “sorcery.”

Aluminium is particularly known for interfering with brain function. When mixed with existing mercury, aluminium becomes about 100-times more poisonous to the body. (Haley, et al.)

Barium interferes with potassium metabolism and can induce heart attacks and stomach pain.

Actually, it’s not only chemtrails but medication, vaccination and even the chemicals in the water and food is all part of sorcery/pharmakeia or drugs as we call it today.

And then, there is C, which was started in 2020 but that is another whole story.

First and foremost I'm a Christian and believe that the Bible is the inspired word of Yahweh God. Introducing people to the Bible through the flat earth facts.
View all posts by revealed4you →
This entry was posted in Conspiracies and tagged Bible and conspiracy, conspiracy. Bookmark the permalink.

2 Responses to Does the Bible Contain Prophecies About Chemtrails?