False Perspective of the Schools

False Perspective of the Schools

Some of the Laws of Perspective are given in the first
part of this book, so that we need not here enlarge upon
them ; but as they are very important, we briefly recapitulate
them.
(1). All parallel lines, like those of a railway, seem to
approach, and finally to meet in the distance.
(2). Straight lines above the eye of the spectator appear to
descend to the eye-line.
(3). The horizontal, or eye-line, is a straight line on a level
with the eye, at whatever elevation the spectator
may be.
(4). Lines, or objects, below the eye-line, remaining at the
same level, seem to rise as they recede, until they
vanish in the eye-line.
(5). Similarly, lines or objects above the height of the
spectator, and maintaining a constant altitude,
appear to descend until they are lost in the eye-line.
(6). Objects, or lines, do not all vanish at the same point
in the horizontal line, but the nearer they are to
that line the sooner they vanish in it, because of the
smaller angle they make with it.
(7). The distant horizon being always on a level with the
eye, whatever be the altitude of the observer, it
seems to rise, or to fall, with the observer ; but he
never has occasion to depress his vision to look
downwards towards it, nor upwards !

Now let us apply these rules, which are the Laws of true
Perspective, to the disappearance of ships at sea, as illustrated
in zetetic diagrams, and violated in those of the
globularist. First take Fig. 10 on the title page of Part II.
The intelligent reader will soon see that this ‘zetetic’ diagram
harmonises with, and illustrates, the first six rules above
given. The hull of the vessel, being nearer the eye-line,
vanishes according to rule 6, before the flags and upper sails,
which are farther from it, because the lower angle is the
lesser. Besides, the hull rides on a dark background of
water, while the upper masts and sails are often against a
bright sky! But the ship never goes over, and then down on
the further side of a bulge, or a hill of water ; for in clear
weather a good telescope, which magnifies the distant angle
of vision, brings again the ship’s hull in sight. Had the ship
gone over and beyond the supposed dip, or curvature, no
telescope could fetch it back again ; and when on the crest
of the supposed hill of water the hull itself should become
visible against the background of a clear sky ! But in harmony
with rule 4, ships never so disappear, because there is
no real rise or protuberance in a calm sea, which, as we have
abundantly shewn is everywhere level or horizontal.

FALSE PERSPECTIVE OF THE SCHOOLS.
Let us now turn to the false perspective sometimes given
in globite diagrams, and books on geography. 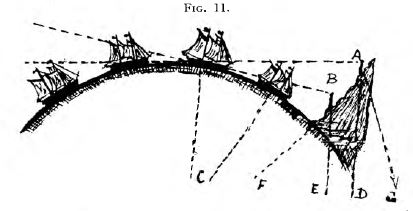 Our figure 11 is taken from a high-class school book ; and
in Scott’s Astronomy there is another on the same principle,
or, rather, on the same lack of principle. This diagram
violates every law of true perspective. The observer at A
is made to look down to his distant horizon, and so is the
one at B, though in the diagram he appears to look up.
This is a double violation of rule 7 as given above. And,
further, the reader will notice how the feet of the observers
are not pointing towards the centre, as they should be if
the earth be globular. The diagram is a “ scientific ” fraud.
whether intentional, or unintentional, we need not here
discuss.

Suppose the observer at A were to turn round and to look
downwards in the opposite direction towards G, what would
he see ? An awful chasm at which the stoutest heart would
quail ! The thing, and the ideas it represents, are a disgrace
to modern education ! Is it any wonder, therefore, that a
famous writer like Goethe should say, “ I curse this modern
theory of Cosmogony, and hope that perchance there may
appear some strong scientist of genius who will take up the
courage to upset this universally disseminated delirium of
lunatics.”— See The Scientific American, April 27th, 1878.

There is much more to this article. Get the whole booklet (PDF). Find out more, click here.

First and foremost I'm a Christian and believe that the Bible is the inspired word of Yahweh God. Introducing people to the Bible through the flat earth facts.
View all posts by revealed4you →
This entry was posted in Uncategorized and tagged law of perspective. Bookmark the permalink.