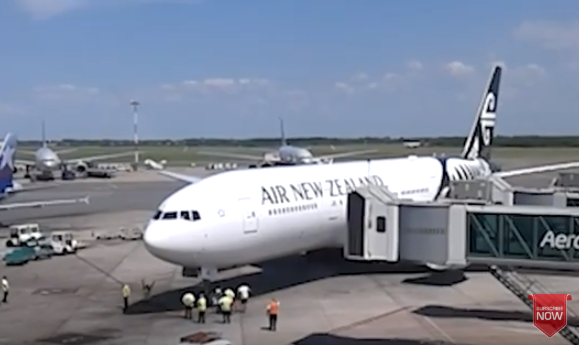 Here is a video by someone who claims that it only takes as little as 10 hours to fly from Argentina to New Zealand. He says that because the flight is so short, it would be impossible on a flat Earth, as it would take much longer. But on a globe Earth, in which he believes, this short time makes sense. Thus, this is his example of “disproving” a flat Earth.

So, how do flat earthers reply?

Simple. He is lying. To prove it, just try to book a flight from Auckland, New Zealand to Buenos Aires, Argentina and look at where you go; the stops you make; and the time.

There is a co-worker, who comes from England, that I know, who told me of his flight from England to New Zealand and it took him 18 hours. That’s right – 18 hours! This is “half way round the world” – the same words this guy used in the video – though from another country. The time it took was much longer than his supposed flight.

We know that the media and just about everyone else lies, so it’s not surprising that a person would lie, too. But aside from that, here is something else you can use to refute arguments like this – without saying to the person that he is lying. Just bring up other facts.

Facts that are ignored are many and include:

…plus many more topics that I will not include here because of time.

If you just focus on water and say that it’s impossible for water to stay on a ball; that the Earth has to be flat because of this is, enough to prove that the Earth is flat. This alone means that everything else has to conform to a flat Earth, which includes flying from one country in the southern hemisphere to another.

Finally, there is another video where someone showed that no matter what flight he tried to book (going from Chile to South Africa), it led to him having to fly north before he flies south again to his destination. I don’t know the link to this and other videos, but it’s out there somewhere.

What’s his answer to that?

That’s how you answer something that you can’t – you ignore it!

Finally, this guy got a domain name that is deliberately misleading calling it: flat earth facts.com when it should be, globe earth lies.com

Summary: In short, people who try to debunk the flat Earth lie or twist something in their single argument, ignore all the other facts about a flat Earth.

First and foremost I'm a Christian and believe that the Bible is the inspired word of Yahweh God. Introducing people to the Bible through the flat earth facts.
View all posts by revealed4you →
This entry was posted in Flat Earth Experiments and tagged flat earth experiments, flights in southern hemisphere. Bookmark the permalink.

3 Responses to Weak Attack On The Flat Earth Facts