Mike Adams Claims It Was Off-World Entities During Exodus

Mike Adams Claims It Was Off-World Entities During Exodus 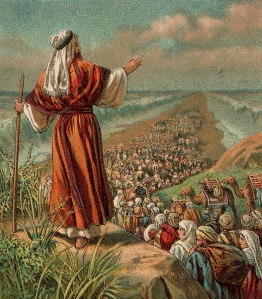 Mike Adam’s true colour have shown through in this article (Click Here). Below, I have the part that I want to discuss. My comments are inserted.

Humans were also tested in Biblical times, as the travels of Moses recorded. If you’re looking for more evidence of off-world influence into the rise of humankind, consider the Biblican [sic] account of Moses.

Thousands of years ago, humans were blessed with language and a written alphabet, but humankind now uses the gift of language to deceive rather than inform. Humans were given a code of conduct for sustainability, recorded in the Bible and the Ten Commandments. Yet today, the human race rejects any standards of ethics, morality or sensible behavior.

The Biblical figure of Moses, by the way, could easily be interpreted as having been in contact with a non-human entity that even the Bible describes as communicating with Moses by speaking into his head. Some have called this presence a “technological God,” and most of the miracles described in Exodus are achievable through advanced weather control technology which early humans perceived as divine miracles. Importantly, when Moses was escaping the Egyptians, his protector — “God” — exterminated the Egyptians that were in pursuit. This intervention that saw the extermination of a specific group of people seems to underscore the idea that Moses wasn’t talking to the real God. Instead, it could be argued that he was being directed by an off-world entity capable of carrying out mass exterminations of humans when it achieves their desired goal of shaping the future of humankind.

“Some have called this presence a technological God.” It seems like Mike goes along with what “others” said. I say – who cares what others say! Of course, these are the New Age type of people, though they don’t use that name today. The chances are that these “others” are atheists.

Adams equates God with humans, or as he calls it, off-world entities. This is blasphemous, but I’m sure Mike Adams doesn’t care. In other words, what Adams is doing is, what he doesn’t like in the Bible, he attributes it Aliens. Adams appeals to his own standard of morals and not what’s in God’s Word.

Talking about technology, just because some of what we read in the Bible can be done today, that does not mean it must have been done by some advanced civilization – on world or off-world!

As far as the Red Sea parting, Adams said that we can do this. So, his reasoning goes something like this: it must have been Aliens that did it back 3,500 years ago. Now, what logic is that? That’s idiot talk! Assuming that we can part the Red Sea with what we have now, that does not mean that Aliens did or anyone else on earth. God said He did and that settles it!

Adams wrote: he was being directed by an off-world entity capable of carrying out mass exterminations of humans when it achieves their desired goal of shaping the future of humankind. He obviously thinks that this is evil. Yes, by today’s anti-Christian government and the politically correct crowd, the killing of a certain group of people is evil in their eyes. Adams, is obviously on the side of those he CLAIMS to be against. Yes, Yahweh, God did have groups of people killed and it was just not the Egyptians, there were many others when you read the rest of the Bible. There is a reason for it, and that was to save His people (that is another story). However, Adams doesn’t like it. Instead of studying the Bible, he’s playing in his lab and making like he is doing all the work himself.

This section of the article goes on…

Consider this text from the Bible and ask yourself whether these events sound like they are directed by the divine God or, instead, by an off-world technological operator that targeted specific humans for extermination in order to carry out a specific geopolitical goal:

Then Moses stretched out his hand over the sea; and the Lord drove the sea back by a strong east wind all night, and made the sea dry land, and the waters were divided. And the people of Israel went into the midst of the sea on dry ground, the waters being a wall to them on their right hand and on their left. The Egyptians pursued, and went in after them into the midst of the sea, all Pharaoh’s horses, his chariots, and his horsemen. And in the morning watch the Lord in the pillar of fire and of cloud looked down upon the host of the Egyptians, and discomfited the host of the Egyptians, clogging[a] their chariot wheels so that they drove heavily; and the Egyptians said, “Let us flee from before Israel; for the Lord fights for them against the Egyptians.”

Then the Lord said to Moses, “Stretch out your hand over the sea, that the water may come back upon the Egyptians, upon their chariots, and upon their horsemen.” So Moses stretched forth his hand over the sea, and the sea returned to its wonted flow when the morning appeared; and the Egyptians fled into it, and the Lord routed[b] the Egyptians in the midst of the sea. The waters returned and covered the chariots and the horsemen and all the host[c] of Pharaoh that had followed them into the sea; not so much as one of them remained.

Note carefully that the entity speaking to Moses may not have been the actual God for the simple reason that this entity chose sides and committed mass murder of one side (the Egyptians) in order to save Moses and his followers. This action was geopolitical in nature, and the entity speaking to Moses had a geopolitical intention. This “God” wasn’t operating out of universal love, he was fulfilling a specific, mundane agenda of protecting one group of people while killing an opposing group. It wouldn’t be hard to argue that this voice speaking to Moses was an impersonator of God who used advanced technology to communicate with Moses and perform “miracles” in order to achieve a geopolitical goal. (The real God does not intervene to mass murder specific groups of humans in order to alter history.)

Adams uses, as his reasoning, that it was not God because He chooses sides. You bet he chooses sides! But because Mike Adams is part of the sheeple, “we must never choose sides as that would offend someone one, it would be hate, it’s not politically correct!”

Part of the goal of shaping early Man was obviously to impart a code of ethics and transfer basic knowledge of food, agriculture and morality to the human race. This was all part of an experiment to see what humanity would do with that knowledge over the next few thousand years… to determine whether humanity could be “uplifted” and made into a civilized world. (See books by Steve Quayle for more details on how advanced off-world civilizations influenced early human civilization. Here’s a place to start: Genesis Builders Prehistoric Ancient Civilizations.)

Here, Adams contradicts himself and he doesn’t even see this – someone who is suppose to have a very high I.Q. Early he said that off-worlders put us here to see if we can be moral, and I quote: Humans were given a code of conduct for sustainability, recorded in the Bible and the Ten Commandments. Yet today, the human race rejects any standards of ethics, morality or sensible behavior.

Then he goes on to say, and I quote: may not have been the actual God for the simple reason that this entity chose sides and committed mass murder of one side (the Egyptians) in order to save Moses and his followers. One is teaching us how to live morally, than these same “people” are doing horrible things to the Egyptians – it doesn’t make sense!

The Bible is not a “pick and choose” book where, if there’s something you don’t like, you don’t attribute it to God; and what you do like it, you attribute it to Him. If that is the case, then you might as well throw out the whole Bible. We are told that the whole book is inspired by God, but according Adams, it’s not. Therefore, someone can say that it was an ET that died on the Cross and it his fellow ET’s, with their technology made it look like he rose again.

Adams is attributing the whole of creation (by implication) to Aliens, and that they set up the world. He also recommends a book by someone who also believes in Aliens coming to earth. In short: that other people put us here and not God. By saying this, Adams discounts the whole Bible.

Now, it’s one thing that a person doesn’t believe the Bible, they usually admit it. But Mike Adams claims that he is a Christian. Also, the fact that he is right on many topics, and he has a very large following. Therefore, many of his followers will be deceived; they will go along with what he wrote here, i.e., that there are other Aliens, that there is with billions of planets, that we can’t believe the Bible, and that there are no evil groups of people.

There are websites who have much truth, but some of them have lies mixed in. They might write some good articles and produce some good videos but watch out for the lies that may be mixed in!

First and foremost I'm a Christian and believe that the Bible is the inspired word of Yahweh God. Introducing people to the Bible through the flat earth facts.
View all posts by revealed4you →
This entry was posted in Bible Studies and tagged Bible Studies. Bookmark the permalink.