The Importance of Perspective In Understanding the Flat Earth Model, part 13

The Importance of Perspective In Understanding the Flat Earth Model, part 13 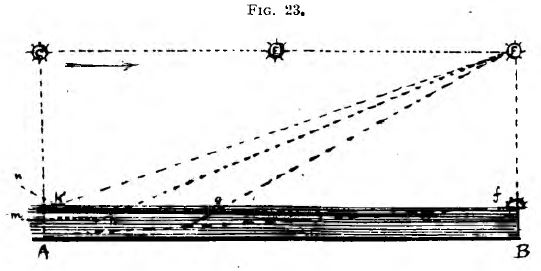 As the previous chapter was longer, my limits require this to be shorter; so I must put the maximum of meaning in the minimum of words.

In the previous chapter, it was shewn how, by perspective alone, the sun appears to descend almost to the horizon, although remaining that day at its average altitude of between two and three thousands miles. In diagram 22 we made no allowance for refraction, which would have still further reduced each of the angles, and especially the lower ones. Diagram 23 supplies the omission, and illustrates how the sun descends to and disappears on the distance horizon.

Light is a very subtle force, and one of the most easily refracted from the rectilinear; but like all other forces, it takes the line of least resistance, whether in a curve or in a line practically straight.

Its undulations falling from above on the atmosphere are refracted, or reflected, more and more according to the angle at which they strike, and the density of the media through which they pass. We need not here enter into the unsettled question of the density of the luminiferous ether, especially as optical density is not always the same as physical density.

Hence those rays of the sun which strike the atmosphere very obliquely, as from F to g, instead of proceeding in a straight line to the earth’s surface below h, take the line of least resistance and proceed towards the spectator at A. now an observer always sees an object in the direction of the rays entering the eye; therefore the observer at A will see the sun’s image in the direction of the line A h f, setting on the distance horizon!

The sun is never seen below the horizon, but at the vernal equinox at 6 p.m. If the earth was a globe the centre of the sun would be 90° below the horizon; while its upper and lower limbs would stretch above and below thousands of miles if the sun were the size the astronomers assert!

The sun’s rays can be entirely cut off from a spectator at the sea-level, as at A, while its reflected light can still be seen by observers in higher altitudes, from a high balloon or from the top of a mountain. There is an angle of total reflection where the light, being reflected upwards off the denser atmosphere, does not penetrate to the surface of the earth, as along the lines F k n. A flat stone thrown obliquely on to the smooth surface of a lake, may strike the water unseen by a fish far below, and leap upwards again and again before sinking by its own weight. And the sun’s lower limb is the first to arrive at the angle of total reflection it is naturally first cut off.

The apostle Paul tells us “the wisdom of the world is foolishness with God”; and it will appear foolish to us if we are enlightened by the wisdom which comes down from above. “If any man lack wisdom” on Creation or other Truth, let him not be too prooud to ask the Creator for it, as this writer has done, and he will find the fulfilment of the promise given in James 1. 5.

First and foremost I'm a Christian and believe that the Bible is the inspired word of Yahweh God. Introducing people to the Bible through the flat earth facts.
View all posts by revealed4you →
This entry was posted in Flat earth and science, Old flat earth news, Sun Moon Stars and tagged flat earth experiment, law of perspective, old flat earth articles. Bookmark the permalink.