Converting an Acquaintance to the Flat Earth

Converting an Acquaintance to the Flat Earth 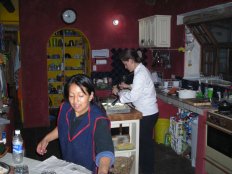 This past Thursday (1 September) I had an opportunity to tell an acquaintance of mine about the flat earth. She is in the alternative health field and already knows some lies that the government and media tell us, so I thought she would be receptive to the flat earth – and I was right.

I started off by saying some things that I know that she would agree with. The general public would agree, also, to such statements as: water seeks its own level, 200 mile per hour winds would destroy most buildings, ships going out of site.

This lady, whom I will call Eveline, has an open mind. So, I was able to talk for about 45 minutes. In the meantime, she asked questions, which I answered. Eveline asked, “Why would they cover this up?” Which is a good question and I told her as much. I said it was to hide God. She, not being a believer asked again, why cover up God.

I went on to say that they got us to believe in the Big Bang and evolution, and that a globe spinning ball going through space fits right in. With the government and educational system telling us that we are just a speck among billions of other planets, we are insignificant.

She wanted more specifics, which is a good sign, as this shows that she is still interested in this. When someone doesn’t ask anything, it shows a complete lack of interest. So, I told words to this effect, “If they can get the population to believe that there is no God of the Bible, that leaves only man. Therefore, it’s man’s laws that we have to follow – which is logical. So, that gives man the freedom to make laws and to make money where they should not, and to control us where they should not.”

I went on to explain, “Under God’s laws, there is peace, prosperity and health. And you know, they make money from disease. They will not dare tell you that there is a cure for cancer, as the average cancer patient is worth about $300,000 in the U.S.” This really resonated with her, as Eveline knows that there are natural cures.

I gave her some literature that I printed up which came from an old booklet titled, “100 Proofs of a Flat Earth.” She said that she would read it. In fact, she read some of it while I was there.

Anyhow, it’s feels good to witness to others and when they believe, it makes you feel better. So, the next time I see her, I’ll ask here what she thinks and if she has other questions. I will add questions that she might not think to ask and tell her that I did not have time to cover in the previous meeting.

Do you, dear Reader, have any experience about talking about the flat earth to others? What did you say to start off? What was your experience? Would you like to share it? I would be glad to print it as this would be good reading for others. You can put down a fake name if you wish. If I get enough people to respond, I will make a special section on the blog (known as a Page) that other reads can go to.

Thanks for being here and take care.

2 Responses to Converting an Acquaintance to the Flat Earth