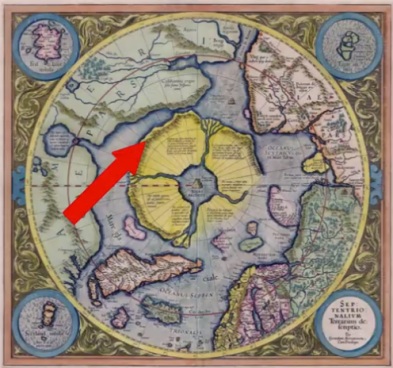 This clue looks into the USGS, otherwise known as the map makers of the world, and a few surprising things that they and others have in common with the flat earth idea.

All the reference links are provided either in footnotes to the page, or in the
resources section at the end of the book, and I encourage you to check them out.
For those of you outside of the United States, USGS stands for United States
Geological Survey, a scientific branch of the US Government. Formed in 1879,
and with the help of the ever expanding American Empire, they quickly became
the premier map makers of the known world. Currently, they have around 9,000
employees and an annual budget of over a billion dollars a year.

They also have extensive science departments covering biology, geography,
geology, hydrology and many programs tied to them. Their motto since the
1990’s has been “science for a changing world”, and I’m going to show you how
true that really is.

What does this large, really boring government group have to do with the flat
earth? To understand that you have to look into their origins, which is in
geography. To do this you’ll need to look at a source that specializes in maps.
There are maps you can see in Wikipedia, but there are others you can reference
as well.

The Wiki list of map projections[4] isn’t much to look at as a whole, although
there a number of interesting takes on the world view. Not only do they have just
about every perspective when it comes to the land we live on, but some detailed
information on where the map originated, including name type, the origin or
creator, and the year the map perspective was proposed.

Now some of these will be very familiar, especially the ones that you would see
on your classroom wall. There are a number of variations here, but the one that
has been debated on recently would be this one, the Gall Peters, which
accurately shows the size difference between the continents, the most obvious
clue being that the white continent of Greenland is actually tiny compared to
Africa. But I digress.

If you keep going down through all the different shapes, you’ll get into circular
maps, but only one of these is a top down perspective that shows the continents
in the center, surrounded by an unbroken ring of ice. In Wiki, it’s called the
Azimuthal Equidistant[5], and just to make it easier I’m going to abbreviate and
call it AE for short. The AE Map is below:

Why is this map so interesting? Well if you’re looking at the Wiki page you’ll
spot a few reasons. The first is that in the notes section this map. And I quote
“Used by the USGS in the National Atlas of the US”. It also mentions that it is
used as the emblem of the United Nations. Of all the maps on this screen, it is
the only one that references a group of any kind.

And if you keep this page open and navigate over to the flat earth section of
Wiki, you’ll notice towards the bottom of the page a similar map. I’ve
referenced it here and you can tell quite easily it’s identical, but not referenced
or linked as the AE model.

To make things even stranger, we go back to the USGS model and you see that it
was first proposed 1000 years ago and you may think, well, that’s a bad link, so
you compare it with the person who proposed it and you get this guy, Al Biruni.
Who was Al Biruni? Well he lived around 1000 years ago and was considered
one of the greatest scholars of his era, schooled in multiple sciences.
Have you ever heard of him? I hadn’t. Maybe it’s multiple bad references in
Wiki. Well no, because NASA knows who he is and named this moon crater
after him. So why is the USGS using a version of the world map designed by a
1000 year old Persian scientist? Because it’s correct, that’s why.
So to be clear, let’s compare them again, the United Nations flag, the USGS
official map of the earth, and the flat earth model. All identical, but one isn’t
recognized and instead ridiculed as an outdated look at the world.

And this is one of those political quandaries that the authority gets stuck in. The
short version is this. The government is on the same page as the flat earth, but
they can’t admit it, even in confidence. We know the earth isn’t flat, “but it
really is”. We know you use the same map as we do, but ours is just an image,
and anyone who says differently is obviously crazy.

Makes you wonder how long the USGS had been using that model as an official
reference. The UN started using it for their logos in 1945, and then made some
final adjustments in 1946. And the UN flag also raises a few questions like, why
isn’t Antarctica represented on the map? Is it supposed to be assumed in the
outer circle, or perhaps the spiky olive branches on the outside? They don’t
mention it anywhere online.

Flag of the United Nations

This is what I like to focus on, the gaps, the holes in the plot, the unanswered
questions. The USGS using the same map as the flat earth, but not saying why, not
recognizing it, or that you can’t link the very same image from the flat earth
Wiki back to the actual AE definition of the projection.

The authority figured out in the 1950’s all of the borders of our enclosed world,
and have done a great job hiding it over the decades. But the world’s a complex
place, and there are clues out there just lying around. I think it’s time you saw
some of them.

So do some of your own research, and ask questions.

First and foremost I'm a Christian and believe that the Bible is the inspired word of Yahweh God. Introducing people to the Bible through the flat earth facts.
View all posts by revealed4you →
This entry was posted in Uncategorized and tagged flat earth clues, mark sargent. Bookmark the permalink.