With the flat Earth why use fiber optic cables? 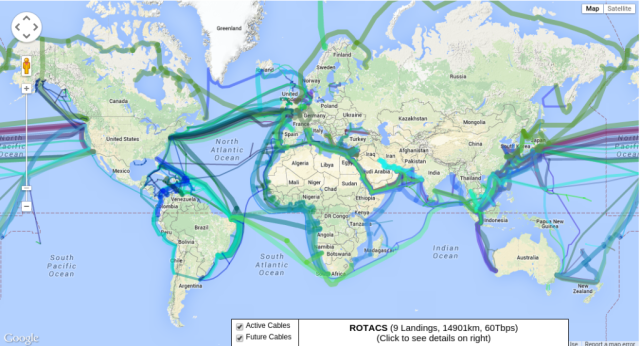 If we had satellites that can do the communication why use cables? Also, if satellites are what iphones rely on, why do you get dead zones in some area? If our communication is by satellites, it would be able to beam signals anywhere.

1. Satellites aren’t used because they can’t carry terabytes of data for less than a billion dollars per communication line.

2. The bandwidth available using a single fiber optic cable and a laser beam is much much greater than you can get from a single satellite radio channel. This is due to the higher frequency and shorter wavelength of light compared to microwaves. The higher the frequency, the greater the bandwidth.

3. An undersea cable is a bundle many fiber optic cables. Consider each fiber cable as a channel. You can have more channels, each with a higher capacity, than you can build radio channels into a satellite.

4. The uplinks and downlinks cost and putting the satellite in space is a huge huge ask and far more risky.

5. The delay for satellite communications would be around 255ms both uplink and downlink. For continuous traffic this not to a bad price to pay. But for burst traffic (like voice) you pay for the delay at each pause. The Rule of Thumb is 10MS per 1000 miles so Rule of Thumb to Europe on say TAT-8 would be about 75MS vs 510MS for satellite.6. Finally, you can fix a broken cable. Once you launch the satellite you don’t get a chance to fix it if it gets broke.

First and foremost I'm a Christian and believe that the Bible is the inspired word of Yahweh God. Introducing people to the Bible through the flat earth facts.
View all posts by revealed4you →
This entry was posted in NASA Space Programs and tagged fake satellites. Bookmark the permalink.

1 Response to With the flat Earth why use fiber optic cables?