People Believe Anything Because They Don’t Know the Basics 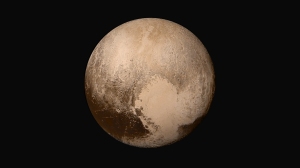 NASA told us that Pluto cast its shadow on to the Earth! What a laugh! What a bunch of BULL! Yet, people believe this. Yes, NASA said that because Pluto got between a star and the earth, the shadow of Pluto was cast on New Zealand and sped across at 53,000 mph.

We know that NASA believes in the heliocentric model of the Universe, yet they say things that would not be possible if the Universe is what they said is. Here is Pluto about 5 billion miles away; it’s smaller than the Moon; and a star, trillions of miles away that has no measurable width of light is suppose to cast its shadow on earth?!

Now, IF this was so, that the shadow of Pluto was cast on the earth, then why don’t we get it from other planets that are much closer and much bigger? With other planets like Jupiter being closer and bigger, there should also be shadows cast constantly! Think of the number of stars that are “behind other planets” and think that there are “trillions of stars.” We should constantly be bombarded with shadows.

As a side note, here is a video that shows how dumb Americans are. It’s produced by Mark Dice; he has many videos testing people’s knowledge. Basically, they all show how dumb Americans are. The video below is testing people on what they know about American Independence Day, which is on July 4. Now, these are not people who live in the ghetto or people who just “got off the boat,” so to speak. This video was taken in San Diego, and it looks like they are middle class.

For foreigners, I don’t expect them to know the answers. But the questions are so simple, so basic that every person who went to school in America should know it. The video would be funnier if it wasn’t so sad. So, when you see this video, it’s no wonder that NASA can get away with saying the most outrageous things. I think that they, too, are testing the gullibility of the American public and are sitting back having a good laugh at all this. Anyhow, here is the video…

First and foremost I'm a Christian and believe that the Bible is the inspired word of Yahweh God. Introducing people to the Bible through the flat earth facts.
View all posts by revealed4you →
This entry was posted in Planets and tagged planet hoax, pluto hoax. Bookmark the permalink.