Note: I’m still not up to par as I’m still on a detox program but I had to get this out to you.

Yes, it has been exactly 50 years ago since the Moon landing hoax. I thought I would put up some videos of documentaries showing this but when I did a search on YouTube I didn’t find any. This is not surprising in that the social media giants have banned free speech. So, I went to archive.org to see what I could find. All I found was some short stupid videos including those by Walt Disney. I even went to another flat earth blog and didn’t find what I was looking for.

The video I was looking for was is called, “A Funny Thing Happened On The Way To The Moon,” but I could not find that. There used to be a website with that name as the URL.

All of this is not surprising as the social media giants already scrubbed a lot about the flat earth. If these videos are still up there, you can not find them by typing in the key words. With that in mind there is a substitute video you can watch here.

One thing that this tells us, is that what we have been saying is true, otherwise why hide it. If, what we believed was a lie, the tech giants would make available information like the fake Moon landing, as it would be easy for the globe earth believers to dispute it and make us look like fools, which is what they really would like to do. But they know they can’t defend their position, so the only thing for them to do is silence us. This shows they are liars!

Now, the next step, when the Communists come in full power it to put us in gulag camps. This is what had been done historically. After all, the anti-Christ Communists can’t allow people who live in society to tell others what’s wrong their system. So they put them in prison/work camps where many died there and those who did live through their sentence their health was broken.

If you do a search on YouTube for Moon landing hoax, you’ll find many videos that do come up but they are all, basically, explaining the questions flat earthers have. But it’s really funny – it shows how stupid they are. What many of these videos do is make up “scientific” sounding words and even contradict what they say! Lol. For example, with there not being any dust on the Lunar Landing Module pods and no crater, their answer is that they landed on rock. Then you see a video with the imprint of Neil Armstrong’s footprint – right in front the the landing craft. How did this come about if they landed on rock?!

Another example is that footprint of Armstrong was still there there years later; they throw up some “scientific” words as to why and they show some line marks on the Moon as reference – as if that is to impress us! Well, since the whole scene is fake, with the whole set up done on some government studio set in Nevada, that is fake, too. It’s like using another fake CGI to confirm another CGI picture. Anyhow, have a good laugh and do a search on YouTube video attempts to cover up their lies.

Even though you may not have a good video to show your friends about the Moon landing hoax, just talk about the firmament/dome and talk about how a vacuum has to have a physical containment and how a pressurised atmosphere needs a physical containment. Without a physical barrier it’s impossible to have either. Critics can not get past this (unless they want to ignore science and live in a fantasy world). So, ANY talk on travel to the Moon and other planets is a lie, too. You don’t even need to enter into a debate on this. As the saying goes, “How can you get to second base without going to first base first?”

Here is what I did find. Hope you find this interesting.

Note: I finally did find a video about “A Funny Thing Happened On The Way To The Moon.” 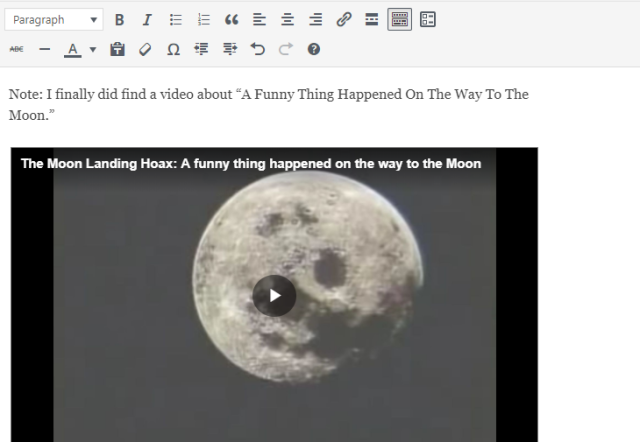 As I was posting this article I had two videos that I embedded, as I’ve done many times before. Then I published it. When I went to the live page I did not see my videos there! So, I did it again, thinking that I made a mistake, and sure enough, my videos did not show up. This prove that the Satanic powers do not want the truth out. I’m sure they know that people like me would be posting something about the fake Moon landing as it’s the big 50th anniversary.

So, what I did was, I make a screen shot of by Dashboard to show you that the video I posted was there. When everything is OK in the Dashboard section it should show up when it’s published.

Anyhow, I guess we can say “thanks” to the evil people for proving that they can’t answer our questions concerning the hoax Moon landing (as well as a 1,001 other questions we have for them, and showing the world what liars they are.

First and foremost I'm a Christian and believe that the Bible is the inspired word of Yahweh God. Introducing people to the Bible through the flat earth facts.
View all posts by revealed4you →
This entry was posted in moon landing hoax and tagged fake moon landing, moon landing hoax. Bookmark the permalink.