Heresy Against The State, part 2

Heresy Against The State, part 2 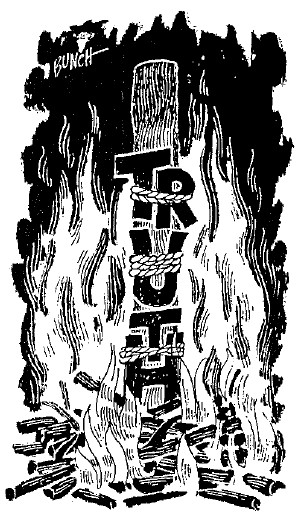 It is important to distinguish between the two types of heretics, otherwise you may lose sight of one of history’s heroes – the independent thinker. If you are programmed to believe that anyone who thinks independently of the establishment is a heretic you should think again. Don’t judge too hastily, and don’t get indignant too quickly towards someone who stands alone against established opinion. It might be that the establishment is in error and the heretic is right (flat earther).

To more clearly understand how a heretic can be a good guy, let’s look closer at the meaning of the Greek word for “heresy”:

This, we see that heresy is simply a choice to be separate from the established norm. So, why did “heresy” change from meaning a choice to meaning a false doctrine? Webster’s 1828 Dictionary gives us the answer in the definition for the word, “heresy”:

…in countries where there is an established church, an opinion is deemed heresy when it differs from that of the church…as men differ in the interpretation of Scripture, an opinion deemed heretical by one body of Christians, may be deemed orthodox by another. In Scripture and primitive usage, heresy meant merely “sect,” “party,” or “the doctrines of a sect,” as we now use “denomination” or “persuasion,” implying no reproach.

Notice that there was no sense of reproach with the original meaning of the word! You can see by Webster’s definition that it was only through the eyes of the church Establishment that “heresy” and “heretic” came to mean something bad. The new usage came from the perspective of the controllers. They didn’t want separatism to exist. They didn’t want people to be able to choose or think for themselves. They wanted to control people and remain in power over them. Thus, the charge of “heresy” is to the church as the change of sedition is to the central government: i.e., tools of control.

In like manner, when people react to flat earthers name of: conspiracy theorists and nutter. If the person is against X, they are given other names – depending on what the topic is. The public is condition to react in a negative way – without them even realising it. The public is so hard-wired in their “conditioned-response” that they don’t even listen to our arguments, much less do research or their own.

Thus, we find another case where the public, instead of having the good sense to distrust the church, acted irresponsibly and allowed others to do their thinking for them. They gullibility sided with the church against the independent thinkers – the separatists who only wanted the freedom to follow their own conscience. The establishment has always been the enemy of the people, and “heretics” have always been enemies of the establishment.

Heretics were the good guys – the heroes who stood against all odds in confronting the powerful establishment. We have been taught to think negatively about heretics, but that was wrong. With the correct definition of “heresy” we can understand that it is NOT right to suppress independent thought. We should not support the establishment (any establishment) which suppresses the freedom of conscience. And we should be grateful to all the heretics who had the guts and moral courage to stand against this tyranny in the past.

Today, heresy against the church establishment still exists in more than one way. Even though people have been duped into believing otherwise, there is really no separation of Church and State in America. The State Church has simply shed its trappings of religion and is now known as the Central Government. The state religion is still there under the guise of faith in its Constitution. As bad as that is, the Government makes up it’s on laws as they go along. You must accept the “America: Love it or Leave it” mentality. And, to think of question the system or suggesting that we need a different one – one that doesn’t murder and rob its people – is “unpatriotic.”

A recent addition to this American religion is that of the holy sacraments of earth worship. Anyone who refuses to parrot the media hype or who questions global warming, or the depleted ozone, is a heretic. Dissent is viewed as blasphemy against orthodoxy.

It is ironic that in America, a land supposedly based on liberty and independence, questioners (independent thinkers) are frowned upon. Thinkers and questioners generate Independence. When anyone questions the globe earth and how we can stay on a spinning ball whirling through space, you are a heretic. The doubt you express against the universe, as it’s taught, all kinds of names are hurled at you.

Heresy Against Those In High Places

We see when people fall prey to those in “authority” and their organizations who try to convince the people unify under them.

Inevitable, the High Priests of whatever topic points a finger at the heretic who questions traditional beliefs. The heretic is looked upon with suspicion, and the people all think, “He must be a bad guy or else no one would have accused him of anything.” The heretic is rejected ostensibly because of doctrine, but in reality it was because he refused to join, and thus sanction their conspiracy. The doctrinal issues in question are not allowed to be questioned because truth is not their objective – rather, they seek power through cohesion. That is the way the educational system and government works.

God loves the essential heretic because he stands against an overgrown, oppressive establishment. The heretic Abraham dismissed the gods of his fathers and separated himself to another land. The heretic David stood up against Goliath who represented the establishment. Martin Luther was a heretic as well as Patrick Henry and Nicola Tesla. I could list more names but that would be a little too much for this article.

As it concerns the flat earth, for example, instead of critics searching Scripture, the resort to phrases like:

They are government plants to discredit Christianity as a whole!

The High Priests of the Big Bang/Cosmos say something like this:

“Only the professors have the authority to determine the truth! Don’t argue with them; just have faith, they know what is best.”

Or they use scare tactics. If name-calling doesn’t work, perhaps being fired from your job (on some other pretext, of course) will suffice.

One is prone to ask, “What are they afraid of? Why is open examination offensive?” The question is, will the people blindly accept priestcraft, or will they think for themselves?”

Heresy Against The State, part 3

Jesus Christ was an essential heretic because He was one man standing up against the establishment. He preached and taught a message that was unacceptable to the state religion. His message taught separatism rather than unity.

Suppose ye that I am come to give peace on earth? I tell you, Nay; but rather division:

For from henceforth there shall be five in one house divided, three against two and two against three.

When you read the story of Jesus’ life, you find He remained true to His plainly-stated purpose of causing division among the people. Everywhere He went, people because separatists as a result of His preaching. Some believed Him and some rejected Him. The result was that truth was separated from falsehood. The ruling priesthood of His day thought of Him as a heretic against the state because He was teaching contrary to what they had pre-defined as truth. Because of this they crucified Him.

Jesus knew that men have not the answers to life. To admit that one man is one sinner is to admit that a group of men is no better than just one sinner. In fact, when sinners organize they are worse than an individual sinner – and less likely to find the right answers.

For there must be also HERESIES (separations) among you, that they which are approved may be made manifest among you.

Separatism is a natural thing in the purpose of Yahweh, because it provides freedom to discriminate between truth and error. Furthermore, separatism is a part of our faith from Abraham.

How Do We Determine The Truth?

Sometimes heresy cease to be something you read in a history book. It hits right home. Maybe heretics aren’t being burned at the stake, but reputations are slandered and friendships are shattered over accusations of heresy. You could suddenly find yourself on one side or the other in a dispute between two schools of thought, or two sects. All negations of “heresy” could ensue.

If you ever have a hard time telling which side is right, part on it in earnest. Also, you need to determine which form of heresy you are dealing with. Is it a case of “heresy against truth,” or “heresy against institutionalized error”?

A few simple observations should expose the priestcraft if it is present. Priestcraft tries to stifle separatism and independent thought. The essential heretic, on the other hand, tries to encourage it. The essential heretic may not be totally correct in his conclusions, but he honestly seeks truth, and encourages others to seek it, rather than defending blind tradition of an oppressive establishment.

Political and religious demagogues (priests) are not concerned about truth and justice. They seek only power. Most politicians and preachers are still of this ilk, so don’t trust them – especially when they pretend to have personal interest in you. Keep one hand firmly on your wallet. Don’t abandon your personal freedom from conscience!

If someone calls you a “heretic,” or one of a dozen other so-called negative words – REJOICE. You’re in good company. Heretics are usually the good guys!

First and foremost I'm a Christian and believe that the Bible is the inspired word of Yahweh God. Introducing people to the Bible through the flat earth facts.
View all posts by revealed4you →
This entry was posted in False Preachers, flat earth critic and tagged heresy, heretic. Bookmark the permalink.