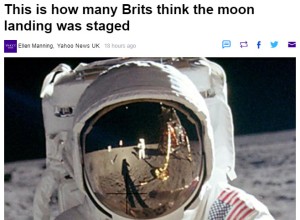 One in six Brits think the moon landing was staged, a new poll has revealed.

The poll by YouGov is part of a look at which conspiracy theories Britons believe.

According to the survey, 16% of Britons say the moon landing was ‘probably’ or definitely staged (12% and 4% respectively).

The poll asked people whether the phrase, ‘the moon landing was staged’ was true or false.

We got to thank Yahoo for showing an photo that proves the Moon landing a hoax! Anyhow, slowly but surely we are gaining new believers.

First and foremost I'm a Christian and believe that the Bible is the inspired word of Yahweh God. Introducing people to the Bible through the flat earth facts.
View all posts by revealed4you →
This entry was posted in moon landing hoax and tagged moon landing hoax. Bookmark the permalink.