Though officially we don’t have a ‘Christian Holocaust Week’ but it would be good to start one. We always hear about the Jewish holocaust. They have monuments and museums around the world – least we forget. But what about the Christian Holocaust? Actually, since the very beginning of Christianity, Christians have been persecuted for their beliefs. And I don’t mean just in ancient Rome or in China under Mao, but throughout the ages. If you don’t know about this, it’s understandable, as the media (as always) hides this kind of information.

The events listed below will give you an idea of some of the things that Christians had to suffer. While, there have been invasions that were not specifically directed against the Christians, such as Genghis Kahn’s invasion of Europe, who were the victims? Christians!

You can go back earlier in time before Christianity. We can go back to our ancestors – the people of the Old Testament, and they were persecuted.

Now, let me say this, the reason why we were persecuted was the effects of not obeying God, and when this happens, we are enslaved, taxed and killed.

The short list of events that led to the murdering of millions of Christians were:

Young people are not taught of the horrors of Communism and there is a reason for it. You see, we have Communism today, it’s just called by another name; the people are wearing different ‘hats.’ It’s called ‘Democracy.’ Perhaps it should be given a negative name like they give to us when a truly representative form of government arises. Maybe these people should be called demonocracy! (Pronounced: de-mon-oc-racy)

Two good books that you can find online for free are: Fox’s Book of Martyrs and The Black Book of Communism (over 900 pages).

The number of Christians murdered far exceed the number of jews killed that we were told in WWII. Under the antichrist Soviet Union, it is estimated that 40 million died. So, why don’t we hear about this? I think you can answer that.

By having a day or a week to remember this each year, it will call to mind of our disobedience to God for having these persecutions. 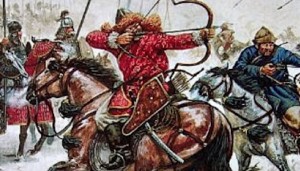 Persecution of Christians have not stopped in this day in age. I don’t care what country you go to. If you know the laws of God and what he wants us to live by, try getting people in a group that advocates this and see what happens. Depending on what you are saying, you will be called: haters, extremists, fanatics and even fascists. You will lose your job, and your social standing in the community. If you get a big enough following is when the trouble will start. For example, if you have enough followers and force a petition on the government to do away with central banks and their usury/interest scheme; if you advocate that only the government has the right to create money and issue it into circulation debt free, you’d be lucky if you are still alive.

If you advocate that certain individuals, because of their lifestyle, are given capital punishment, you’ll be attacked in the street. If you have a job, you might find out that you’ll be fired. Of course, there’ll be some pretext for it, so as to make it look like your government supports freedom of speech but this will just be a cover-up.

So, if the above is done in your country, you’ll see how quick Christians will be persecuted.

So, why are Christians not persecuted now? Because most of them have so water-downed what they should be saying, that they completely conform to the system. And when the government sees this, they don’t care that they believe in Christ because they have changed so much that they might as well be atheists; because these ‘Christians’ are absolutely no threat to them, that the government sees no reason to put them in prison or murder them.

It’s like in Roman times, you could believe in whatever god you want (as they had many) but it’s the State that you should obey. Back then, the Romans had the State festival days, and you better attend, pay taxes and go off to war if they want you to.

Not only do Christians have a water-down belief but they keep it within the four walls of the church. To this, the antichrists are very happy.

So, Christian Holocaust is still with us today.

First and foremost I'm a Christian and believe that the Bible is the inspired word of Yahweh God. Introducing people to the Bible through the flat earth facts.
View all posts by revealed4you →
This entry was posted in Hidden history and tagged controlled media, Hidden history. Bookmark the permalink.