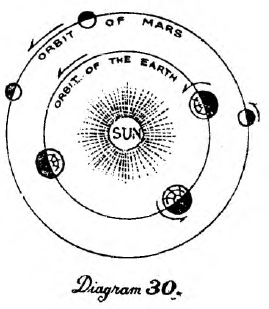 “Many shall investigate, and knowledge shall increase.”

Truth is great and must prevail, so that all who are taught, led, or persuaded to contend for the impossible, must sooner or later knuckle down to the possible, the inevitable, and the true. Man’s nature, since the fall, is so constituted that imposture has more hold on his intellectual faculties than truth; and that which is false, can attin much more readily and universal acceptance than that which is true; thus a lie, once made to fit, can get round the world while truth is putting its boots on.

It has been thus with modern astronomy, which is considered by all the educated and learned, to be such a certain, settled and intellectual science, that they are disgusted with the least hint that this boasted science is founded on a scanty and baseless foundation; but the truth will out, and if any man wishes to be wise, even in the things of this world, he must be willing to commence fool, that he many we wise. Prince Bismarck, said, “I have always endeavoured to learn new things, and when I have had, as consequence, to correct an earlier opinion, I have done it at once, and I am very proud to have done so.” A Portsmouth tradesman, said, when spoken to on the subject of astronomy, “I am quie satisfied about it, and if I am wrong, I have no desire to be put right.” An American writer says, “The man who odes not care to learn if his decision is right or wrong, is not half a man.” This is a lamentable state of mind on matter, but on the subject of astronomy is very inconsiderate. Suppose Dr. Cousins, for instance, were to tell you that your heart was the breathing apparatus of your system, and the lungs, the organ that propelled the blood through your veins, you would think he was a long way from being an eminent Portsmouth physician; and rightly too, for no medical man could understand the human frame if his knowledge of physiology held such a baseless theory. It is precisely the same with the science of astronomy; no astronomer can be correct with the science, unless he understands fully the relative and active positions of the sun and the earth; the sun being the anima mundi, the soul and heart of the universe.

It matters not how may lines, angles, pretty wheels, and cat sticks they may draw, nor how wodnerfully they may seem to magnify, calculate and exaggerate the distances and magnitudes of the heavenly bodies; if they recokon on a reolving earth, and simply a staring sun, all is wrong. They make their boased knowledge the mere tool of astonishingness, not the natural or sublime science of astronomy.

Much will be the surprise to most readers to learn that all modern measurements of the heavenly bodies, is based upon the results of experiments, that really mane the peculiar position, and toss up a halfpenny. Mr. Richard Proctor – the great modern astronomy, tells us, “Anyone can tell how many times its own diameter the sun is removed from us. Take a circular disc and inch in diameter, a halfpenny for instance, and see how far it must be place to exactly hide the sun, the distance will be found to be rather more than 107 inches, so that the sun like the halfpenny which hides his face, must be rather more than 107 its own diameter from us; so that the supposed distance of 95,000,000 miles rests, probatum est, upon the peculiar position of one halfpenny. Whatever the half penny should happen to reveal, that decides and regulates the magnitudes, the distances and calculations of all the rest of the heavenly bodies, ad infinitum, to the world’s end. For he says, “We are so constituted as to seek after knowledge; and knowledge about the celestial orbs is interesting to us, quite apart from the use of such knowledge in navigation and surveying. It is easy to show that the determination of the sun’s distance is a matter full of interest, for on our estimate of the sun’s distance, depend our ideas as to the scale, not only of the solar system, but the whole visible universe.

First and foremost I'm a Christian and believe that the Bible is the inspired word of Yahweh God. Introducing people to the Bible through the flat earth facts.
View all posts by revealed4you →
This entry was posted in astronomy and tagged flat earth and astronomy. Bookmark the permalink.