An Argument by a Critic of the Flat Earth

An Argument by a Critic of the Flat Earth 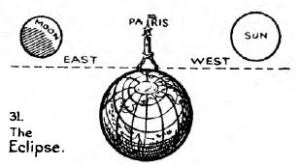 Some critics of the flat earth would say that we are held on a spinning earth by the magnetic force of the earth.

As flat earth believer, it’s not even worth address such an argument, but for the sake of a few critics who read this, I’ll just ask them this: Since when does a magnet attract non-ferrous materials? How can a magnetic field hold molecules of gas (from our atmosphere) in place? It simply can’t. Case is closed! End of conversation.

If you take a magnet of say, 3,000 gauss and there is a piece of iron attached to it, it will blow off in a 1,000 wind. Now this guy is a believer in the heliocentric model of the universe. Well if he did, he would have to believe that the earth is going around the Sun at 65,000. Now, imagine a wind of this speed blowing past at this speed.

Another argument a critic might make is, “Well, it’s like being in an airplane – passengers don’t feel the wind; they are not blow off the plane!” They try to use this argument to make an analogy. This is NOT an analogy. The reason why is simple. There is a solid barrier between the air outside and the people inside, otherwise known as the hull of the plane. There is NO barrier around the earth. IF there were, what could stand up to 65,000 mph speed going around the Sun? What would could stand up to protect us from even high speeds (of 500,000 mph as we go around the Milky Way)? And, talking about barriers, the earth is “suppose” to be spinning right below our feet. Anyone can see that it’s not.

First and foremost I'm a Christian and believe that the Bible is the inspired word of Yahweh God. Introducing people to the Bible through the flat earth facts.
View all posts by revealed4you →
This entry was posted in flat earth discussion, Flat Earth Questions and tagged flat earth critic. Bookmark the permalink.