History of Astronomy From the Roman Empire to the Present, Part 5

History of Astronomy From the Roman Empire to the Present, Part 5

THE DISTANCE TO THE MOON

Let us pass on to something more important, the measurement of the distance to the moon, the first of the heavenly bodies to be measured. This was performed by Lalande and Lacaille in the year 1752, using the method of direct triangulation. Lalande took one of the observations at Berlin, while Lacaille took the other at the same time at the Cape of Good Hope ; a straight line (or chord) joining these two places giving them a base-line more than 5,000 miles in length.

The moon was at a low altitude away in the west, the two observers took the angles with extreme care, and at a later date they met, compared notes, and made the necessary calculations. As a result the moon was said to be 238,830 miles from the earth, and to be 2,159.8 miles in diameter, the size being estimated from its distance ; and these are the figures accepted in astronomy the world over at the present day.

I have occasion to call the reader’s attention to the fact that some books— Proctor’s “Old and New Astronomy” for example— in describing the principle of how to measure to the moon, illustrate it by a diagram which differs from our diagram 8. Though the principle as it is explained in those books seems

plausible enough, it would be impossible in practice, for the diagram they use clearly shows the moon to be near the zenith. Further, it is often said that the distance to the moon has been several times measured, but the fact is that it is of no consequence whether it has or not, for it is the result obtained by Lalande and Lacaille which is accepted by astronomy, and their observations were taken as I have stated, and illustrated in diagram 8. Moreover, one of the greatest living authorities on astronomy tells us that their work was done with such precision that “ the distance of the moon is positively settled, and is known with greater accuracy than is the length of any street in Paris.”

Nevertheless we will submit it to the test. There is every reason to believe that the practical work of these two Frenchmen was most admirably done, and yet their labours were reduced to naught, and the whole object of the triangulation was defeated, because, in making the final computations they made ” allowances ” in order to conform to certain of the established false theories of astronomy.

One of these is the Theory of Atmospheric Refraction, which would have us believe that when we see the sun (or moon) low down on the horizon, at sunrise or sunset, it is not really the sun itself that we see, but only an image or mirage of the sun reflected up to the horizon by atmospheric refraction, the real sun being at the time at the extremity of a line drawn through the centre of the earth, 4,000 miles below our horizon. (That is according to the astronomy taught in all schools.)

According to this theory there is at nearly all times some degree of refraction, which varies with the altitude of the body under observation, so that (in simple) the theory declares that the real moon was considerably lower than the moon which Lalande and Lacaille actually saw, for that was only a refracted image.

They had, therefore, to make an allowance for atmospheric refraction. They had to find (by theory) where the real moon would be, and then they had to modify the angles they had obtained in practical triangulation, by making an allowance for what is known as “ Equatorial Parallax.”

It is difficult not to laugh at theories such as these, but I can assure the reader that astronomers take them quite seriously. If we interpret this rightly, it is suggested that if Lalande and Lacaille will imagine themselves to be located in the centre of the earth they will perceive the moon to be at a lower altitude than it appeared to them when they saw it from the outside of the earth; and modern Copernican astronomy required that on their return to Paris they should make allowance for this.

Now observe the result. It has been shown that “Equatorial Parallax” is only altitude; it is a question of higher or lower; it has to do with observations taken from the top of the earth compared with others taken theoretically from the centre. 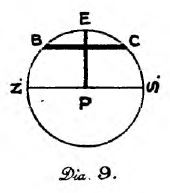 Really it is an imaginary triangulation, where the line E P in diagram 9 becomes a base-line. The line E P is vertical; therefore it follows that the theoretical triangulation by which Equatorial Parallax is found is in the vertical plane. . . We remember, however, that the moon was away in the west when seen by Lalande and Lacaille, while their base-line was the chord (a straight line running north and south) connecting Berlin with the Cape of Good Hope. These facts prove their triangulation to have been in azimuth; that is, in the horizontal — or nearly concerned with horizontal— plane; indicated by the base-line B C in diagram 9.

Now the three lines of any and every triangle are of necessity in the same plane, and so it follows that every calculation or allowance must also be in that plane; but we find that while Lalande and Lacaille’s triangulation to the moon was in the horizontal plane B C, the allowance they made for Atmospheric Refraction and Equatorial Parallax was in the contrary vertical plane E P! . . .

By that almost inconceivable blunder real and imaginary angles came into conflict on two different planes, so the triangulation was entirely lost; and as a consequence the distance of the moon is no more known to-day than it was at the time of the flood.

N.B.— All other attempts to measure the distance to the moon since that time have been defeated in a similar manner.

First and foremost I'm a Christian and believe that the Bible is the inspired word of Yahweh God. Introducing people to the Bible through the flat earth facts.
View all posts by revealed4you →
This entry was posted in astronomy and tagged astronomy, flat earth and astronomy, history of astronomy. Bookmark the permalink.