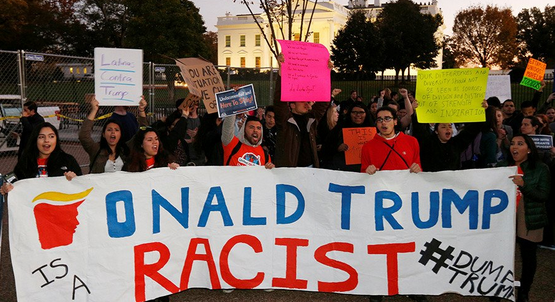 Not only did the media get almost everything about this presidential election wrong, but it became the central issue, or the stand-in for all those issues, that the great new American Trump Party voted against.

There are paid for rioters – including those who generally don’t like Trump. The rioting is orchestrated by George Soros. This is not surprising considering all the financed and so-called revolutions such as “Spring Revolution, the Orange Revolution,” etc.

What the Rest of America Sees 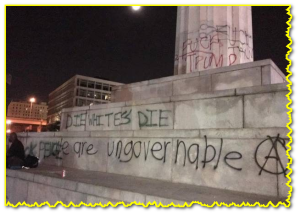 What the rest of America sees in these riots is the true nature of Hillary Clinton’s supporters. They see:

Many are probably illegal immigrants

They want to kill White people

Many are ignorant and low class

Many are leftists and Communists

Also, by the looks of the videos, rest of America sees these people as mostly young and thus are completely ignorant of the corruption of the system. By the writing on the Robert E. Lee Monument in New Orleans, they wrote “we are ungovernable,” which is telling the people they are anarchists. By the destruction of property, the damaged cars and businesses, they care not about the property of other hard working people. Many rioters also take advantage of the situation and loot stores. As a result of all this, the average hard working person, the average Christian, is waking up to the truth. They are waking up to realize that all this “political correction,” is wrong and the truth is just the opposite; that they should be the opposite of “what you are not suppose to be.”

What Could the Results Be

In my years of political awareness and how the other side acts, people are waking up that race does matter, that these people are not the kind you would want in your home or babysitting your children. And you certainly don’t want these people to vote for others that are like them rule the nation.

There have been many Tweets of encouraging someone to assassinate Donald Trump him. If these threats were directed to any other President or political candidate they would be arrest and charge with a felony, but not these people – that is until Trump enters office. Then, maybe Trump will have the police go after these people. It’s easy for the police to find out who Tweeted what or who posted a treat on another social media site, as all these posts are traceable. So, these people will have something to worry about in 2017! 🙂

In the UK “Sun” newspaper, November 11, the screaming headline is: Trump is a Walking Dead Man. Sometimes you wonder if the newspapers really would like to see this happen. I think they really are, considering who owns the newspapers.

First and foremost I'm a Christian and believe that the Bible is the inspired word of Yahweh God. Introducing people to the Bible through the flat earth facts.
View all posts by revealed4you →
This entry was posted in Conspiracies and tagged donald trump news. Bookmark the permalink.