The True Distance From the Sun

The True Distance The Sun is From The Earth

IT is now demonstrated that the earth is a plane, and therefore the distance of the sun may be readily and most accurately ascertained by the simplest possible process. The operation is one in plane trigonometry, which admits of no uncertainty and requires no modification or allowance for probable influences. The principle involved in the process may be illustrated by the following diagram, fig. 56. 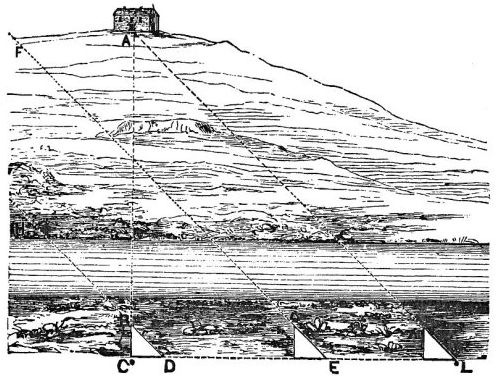 Let A be an object, the distance of which is desired, on the opposite side of a river. Place a rod vertically at the point C, and take a piece of strong cardboard, in the shape of a right-angled triangle, as B, C, D. It is evident that placing the triangle to the eye, and looking along the side D, B, the line of sight D, B, H, will pass far to the left of the object A. On removing the triangle more to the right, to the position E, the line E, F, will still pass to the left of A; but on removing it again to the right, until the line of sight from L touches or falls upon the object A, it will be seen that L, A, bears the same relation to A, C, L, as D, B, does to B, C, D: in other words, the two sides of the triangle B, C, and C, D, being equal in length, so the two lines C, A, and C, L, are equal. Hence, if the distance from L to C is measured, it will be in reality the same as the desired distance from C to A. It will be obvious that the same process applied vertically is equally certain in its results. On one occasion, in the year 1856, the author having previously delivered a course of lectures in Great Yarmouth, Norfolk, and this subject becoming very interesting to a number of his auditors, an invitation was given to meet him on the sea-shore; and among other observations and experiments, to measure, by the above process, the altitude of the Nelson’s Monument, which stands on the beach near the sea. A piece of thick cardboard was cut in the form of a right-angled triangle, the length of the two sides being about 8 inches. A fine silken thread, with a pebble attached, constituted a plumb line, fixed with a pin to one side of the triangle, as shown at P, . The purpose of this plumb line was to enable the observer to keep the triangle in a truly vertical position; just as the object of the rod C, in fig. 56 was to enable the base of the triangle to be kept in one and the same line by looking along from E and L towards C. On looking over the triangle held vertically, and one side parallel with the plumb line P, from the position A, the line of sight fell upon the point B; but on walking gradually backwards, the top of the helmet D, on the head of the figure of Britannia, which surmounts the column, was at length visible from the point C. On prolonging the line D, C, to H, by means of a rod, the distance from H to the centre of the Monument at O, was measured, and the altitude O, D, was affirmed to be 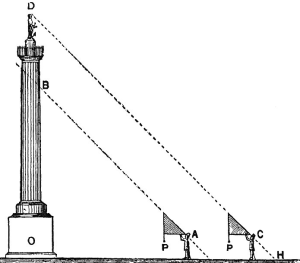 the same. But of this no proof existed further than that the principle involved in the triangulation compelled it to be so. Subsequently the altitude was obtained from a work published in Yarmouth, and was found to differ only one inch from the altitude ascertained by the simple operation above described. The foregoing remarks and illustrations are, of course, not necessary to the mathematician; but may be useful to the general reader, showing him that plane trigonometry, carried out on the earth’s plane or horizontal surface, permits of operations which are simple and perfect in principle, and in practice fully reliable and satisfactory.

The illustrations given above have reference to a fixed object; but the sun is not fixed; and therefore a modification of the process, but involving the same principle, must be adopted. Instead of the simple triangle and plumb line, represented in fig. 57, an instrument with a graduated arc must be employed, and two observers, one at each end of a north and south base line, must at the same moment observe the under edge of the sun as it passes the meridian; when, from the difference in the angle observed, and the known length of the base line, the actual distance of the sun may be calculated. The following case will fully illustrate this operation, as well as its results and importance:

The distance from London Bridge to the sea-coast at Brighton, in a straight line, is 50 statute miles. On a given day, at 12 o’clock, the altitude of the sun, from near the water at London Bridge, was found to be 61 degrees of an arc; and at the same moment of time the altitude from the sea-coast at Brighton was observed to be 64 degrees of an arc, as shown in fig. 58. The base-line from L to B, 50 measured statute miles; the angle at L, 61 degrees; and the angle at B, 64 degrees. In addition to the method by calculation, the distance of the under edge of the sun may be ascertained from these elements by the method called “construction.” The diagram, fig. 58, is the above case “constructed;” that is, the base-line from L to B represents 50 statute miles; and the line L, S, is drawn at an angle of 61 degrees, and the line B, S, at an angle of 64 degrees. Both lines are produced until they bisect or cross each other at the point S. Then, with a pair of compasses, measure the length of the base-line B, L, and see how many times the same length may be found in the line L, S, or B, S. It will be found to be

sixteen times, or sixteen times 50 miles, equal to 800 statute miles. Then measure in the same way the vertical line D, S, and it will be found to be 700 miles. Hence it is demonstrable that the distance of the sun over that part of the earth to which it is vertical is only 700 statute miles. By the same mode it may be ascertained that the distance from London of that part of the earth where the sun was vertical at the time (July 13th, 1870) the above observations were taken, was only 400 statute miles, as shown by dividing the base-line L, D, by the distance B, L. If any allowance is to be made for refraction–which, no doubt, exists where the sun’s rays have to pass through a medium, the atmosphere, which gradually increases in density as it approaches the earth’s surface–it will considerably diminish the above-named distance of the sun; so that it is perfectly safe to affirm that the under edge of the sun is considerably less than 700 statute miles above the earth.

The above method of measuring distances applies equally to the moon and stars; and it is easy to demonstrate, to place it beyond the possibility of error, so long as assumed premises are excluded, that the moon is nearer to the earth than the sun, and that all the visible luminaries in the firmament are contained within a vertical distance of 1000 statute miles. From which it unavoidably follows that the magnitude of the sun, moon, stars, and comets is comparatively small–much smaller than the earth from which they are measured, and to which, therefore, they must of necessity be secondary. and subservient. They cannot, indeed, be anything more than “centres of action,” throwing down light, and chemical products upon the earth.

First and foremost I'm a Christian and believe that the Bible is the inspired word of Yahweh God. Introducing people to the Bible through the flat earth facts.
View all posts by revealed4you →
This entry was posted in Flat Earth Experiments, Sun Moon Stars and tagged flat earth and sun, sun distance. Bookmark the permalink.

2 Responses to The True Distance From the Sun